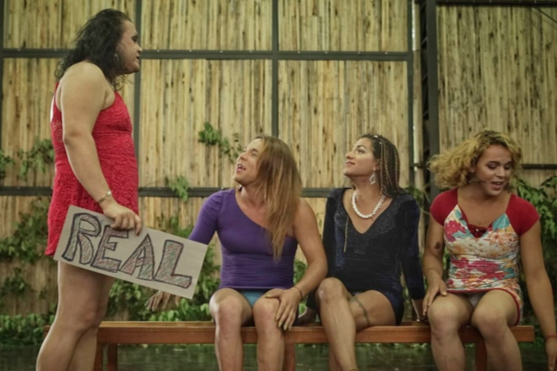 We are in the Uruguayan countryside near the Brazilian border. Amidst the hilly landscape the wooden rehearsal space of the Campo Abierto artist residence sketches out. It is surrounded by eucalyptus trees, grown for a Finnish-owned pulp mill.  We hear birds signing and cows mooing.

A theatre group is preparing for a performance in the rehearsal space. Three trans women slowly move towards the test audience, talking about their life experiences. They look straight into our eyes, sometimes defiantly, sometimes flirting, sometimes even inviting us to dance. They speak about things that have happened. The family shuts a child out if s/he turns out to be a trans person. The principal expels a student when s/he isn’t ready to dress according to the assumed gender. Personal confessions regarding life as a trans woman, reproductive organs, prostitution, non-binary identity. Performing alongside the women is a flock of hen.

All the performers in the Naturaleza Trans (Trans Nature) performance live in Rivera, a small town through which the national border between Uruguay and Brazil runs. The language of the performance alternates between Spanish, Portuguese and Portugnol, a mixture of the two. “The starting point of the performance is the idea of being positioned on a border”, the director Marianella Morena says. And she adds: “Uruguay and Brazil, man and woman, us and them. A third dimension, something new, is born from breaking the border.”

At times the performers slap each other with big leaves. Morena explains that it is a Brazilian cleansing rite. Big and bold bodily expression is an integral part of Brazilian culture. Trans laws have traditionally been quite progressive in Brazil, but the statements of the current government have strongly echoed the policies of the Catholic Church and words of the Bible. The Minister of Culture, for example, has announced that he would like to have boys dressed in blue and girls in pink. In Uruguay the government has actively pursued the trans issue and recently passed a trans law that is, even on global scale, remarkably progressive. The general atmosphere is however more conservative and a part of the Congress want to repeal the new law.

“Here we don’t have to!”, Nicole, one of the stars of the performance, exclaims when I tell her that in Finland a person has to prove their infertility if they want to receive a social security number that matches their newly assigned gender. Nicole is strongly active in an NGO advocating for the rights of trans people.  She feels that true inclusion is still a distant dream in Uruguay. If you’re neither woman nor man, you’re invisible, you’re nothing. On stage Nicole is very visible and she openly challenges the audience and its conceptions of sexuality. The speech is documentary by style and partly improvised: “You don’t have to give up the male reproductive organs to be a trans woman. You can be it at many different levels at the same time.”

Nicole says that making theatre has taught her self-restraint: “I tend to express myself strongly and I can be pretty outspoken. On stage I’ve realized that it’s good to take a few breaths before you act. This has taught me how to engage with people better.”

The writer is a Helsinki-based actor-director. He is part of the ArtsEqual research initiative.

The original text was published in Voima magazine (7/2019).