What are the interfaces and interactions between politics and music education? - Global Visions

The “Global Visions Through Mobilizing Networks” research project, coordinated by the University of the Arts Helsinki, Sibelius Academy in Finland, seeks to co-develop intercultural music teacher education by engaging three different institutions, and their respective music teacher educators and researchers, in processes of collaborative and research-based learning. The three institutions involved are the Sibelius Academy in Helsinki, the Levinsky College of Education in Tel Aviv and the Nepal Music Center in Kathmandu. The ultimate aim is to envision programmes of music teacher education which will equip students with the necessary skills and understandings to work within increasingly diverse environments. The project is funded by the Academy of Finland during the years 2015-2020. The funding was initially granted for 2015-2019 and later extended to December 2020.

null What are the interfaces and interactions between politics and music education? 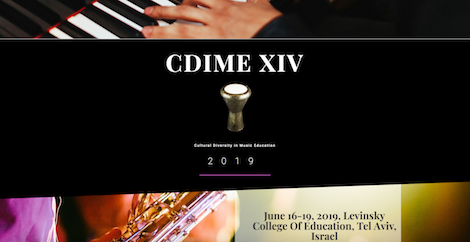 What are the interfaces and interactions between politics and music education? This was the question that drove the twenty-fourth Cultural Diversity in Music Education Conference (CDIME) which was hosted by the Levinsky College of Education in Tel Aviv, Israel between 16 and 19 June 2019. Israel was an apposite choice for this conference and theme, and Claudia Gluschankof and Amira Ehrlich acquitted themselves exceptionally well of the daunting task of arranging a conference which has no professional body behind it. Politics and difference were at the forefront of participants minds, given the troubled history of the region, and the first keynote set the stage for a continued engagement with the complexities of the political situation in Israel and further abroad. The second keynote challenged the idea of the idea of a ‘global ecumenia’ in music education, a utopian peaceful co-existence that is accessible through good teaching and in which music is neutral, arguing instead for the role of theory as a generator of practices through shaping thought and imagination. The third keynote argued for a strong parallelism between eastern and western music that should emphasized rather than downplayed.

The uneasy tensions of being in a country that is clearly divided, with checkpoints, segregated living areas, and armed young soldiers walking the streets, together with the uneasy tensions of holding a conference on cultural diversity in a college that clearly values and emphasises the western classical tradition over the local musics, provided fruitful ground for rigorous debate and discussion. While quick and superficial answers are easy, I think most attendees of this conference came away with a deeper understanding of the complexities involved when thinking about politics and music education. Such a deeper understanding will hopefully feed into stronger theorization on the role of the political in our work, and thus pave the way for better founded engagement across diversity.

The twenty-fifth CDIME conference is scheduled to take place at the North-West University in Potchefstroom, South Africa, between 13 and 16 September 2021. As conference organizer I warmly welcome you to South Africa for what promises to be further fruitful discussion around belonging and diversity in music education.

About the project
Researchers
News