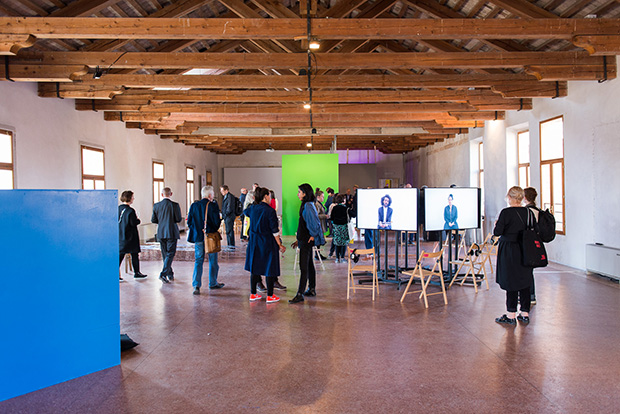 The Research Pavilion opened its doors Wednesday May 10 with a party at the Sala del Camino venue in Venice’s Giudecca island. The opening week continues with the Pavilion’s inaugural exhibition, You Gotta Say Yes to Another Access, together with several Camino Events.

The week continues with the following events:

Microhistories is a project and anthology that will be hosted by Magnus Bärtås (Konstfack) and presented together with lectures by artist/PhD candidate Behzad Khosravi Noori (also in the inaugural exhibition) and curator and theoretician Suzana Milevska. The presentation includes a screening of a work by Iranian filmmaker Pirooz Kalantari.

When institutions digitize their exhibitions, should also analogue conventions be (re)produced? How do agreements and tacit rules translate into replication of (gallery) spaces, online (re)presentation of artworks, and (simulated) autonomy of access?

The two-hour presentations & discussion session is proposed as a critical amplification of Vincent Roumagnac's artistic research project 'Backdrop' shown in the exhibition You Gotta Say Yes to Another Access. It is generated from the interest to diffract the research focus on expanded theatre and time ecology by discussing assumptions, perspectives and prototypes on the theme of 'Future Stages/Stage Futures', under the umbrella-topic of the Research Pavilion 'The Utopia of Access' and on the intersection of artistic research, performing arts, philosophy and architecture. The session will consist of two presentations and one collective exercise followed by an open discussion. By Vincent Roumagnac, Emmanuelle Chiappone-Piriou and Esa Kirkkopelto.

Two new books are presented, fresh from the press:

The Pen is mightier than the word is a video work about artificial intelligence, research, Sci-Hub and Open Access publishing of research.

Organised by Norwegian Academy of Music.

This unhinged and precarious spectacle is re-orchestration of a “cinematic event” and “the narrative” with the help of strips of found footage film and by using deconstructed elements of the cinematic projection process. This assemblage is combined with some live micro camera feed, which will slowly unravel itself.

Find the Pavilion at: