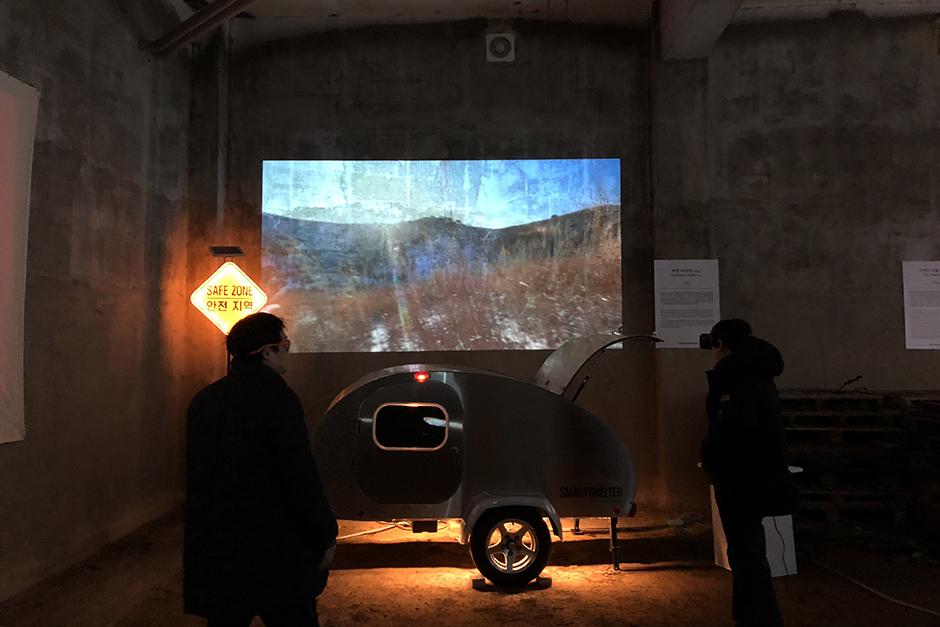 The idea of this research initiative around “shelters” emerged from the artists’ participation in interdisciplinary research-based colloquiums that were held during the past three years, in conjunction with the Research Center of the Arts at Hongik University and the Interlab, a multidisciplinary research group consisting of visual artists/curators, architects, engineers and philosophers. Following a thread of questioning that emerged out of these discursive events, the artists inquire into South Korea’s “compressed and rapid modernization” after the Korean War that led to the dominance of high-rise apartment cultures and function-oriented urban planning. Because of the primary focus on the efficient and rapid accumulation of capital in the urban space, the history of urban development has often run counter to the “safety and protection” of residents in the urban environment, building structures that rather distress subjectivity than provide “shelters” that are human-centered.

In recent years, changes in the South Korean environment have also called these histories and developmental logic into question. These changes in environment are social, economic and natural, ranging from broad crises in recent years like the social tragedy of the sinking of Sewol, the South Korean ferry, the outbreak of earthquakes in the southern part of South Korea and the increasing number of youth that are unable to find housing under rising housing costs and high youth unemployment. These crises have drawn attention to the absence of the basic provisions of “shelters,” a permeating feeling of insecurity in contemporary life.

Using this umbrella term of “shelter,” this multi-disciplinary event will be loosely organized around three lines of “shelter” related inquiry: 1) disaster-related shelter: the engineering, technological and architectural visualizations for emergency spaces 2) artistic/experimental shelter: artistic endeavors that conceive of and provide shelters for community 3) temporary residential shelters: visualizations and explorations for spaces that provide shelters for wellbeing