The fourth Colloquium on Artistic Research in Performing Arts 2015 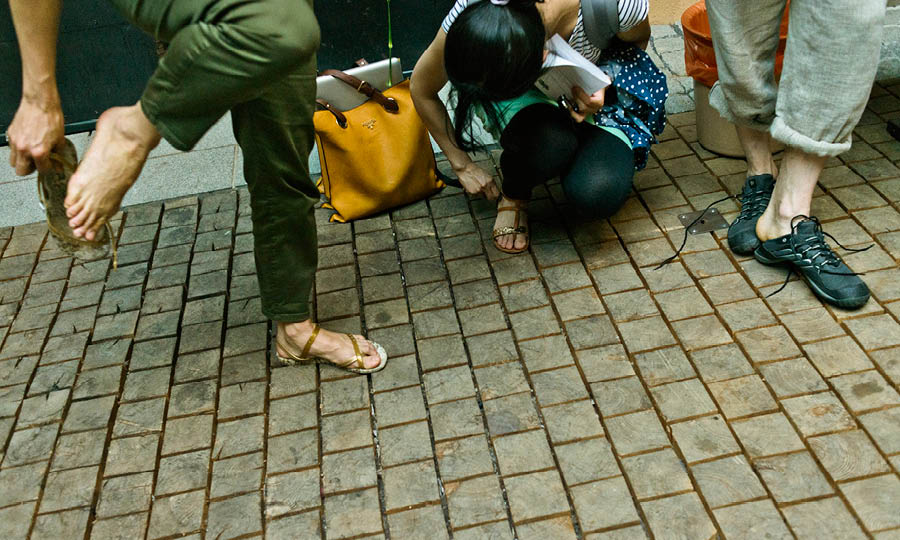 The Colloquium on Artistic Research in Performing Arts CARPA4 brought together 70 experts in their fields from 13 different countries to the Theatre Academy of the University of the Arts Helsinki on 10 – 13 June, 2015. Colloquiums theme was The Non-Human and the Inhuman in Performing Arts – Bodies, Organisms and Objects in Conflict.

CARPA4 observed critically anthropocentrism in performing arts and wondered the meaning of objects and non-human extent in arts and artistic research. The theme was approached from different perspectives by the colloquium’s keynote speakers Professors Peta Tait, Timothy Morton, and Boyan Manchev.

CARPA is a biennual international colloquium that focuses on performance art and artistic research. The colloquium is organised by the Performing Arts Research Centre (Tutke) of the Theatre Academy of the University of the Arts Helsinki.

Proceedings of CARPA4, including articles from the accepted presentations, will be published in NIVEL – an open access web publication, by December 2015. We are happy to include different types of papers, presentations and workshop reports including images, video and audio clips in these proceedings of the colloquium.

The Performing Arts Research Centre (Tutke) at the Theatre Academy, University of the Arts Helsinki welcomes artistic researchers at doctoral and post-doctoral levels to take part in the fourth biannual colloquium on artistic research in performing arts:

The Non-Human and the Inhuman in Performing Arts: Bodies, Organisms and Objects in Conflict

The fourth Colloquium on Artistic Research in Performing Arts (CARPA4) asks how different practices and techniques in performing arts face the contemporary critique of anthropocentrism. How do they participate in renegotiation on the role and the limits of the human and what kind of critique does the involvement with the non-human entail?

Since the end of the past century, the growing consciousness of the limits of the planet and the biosphere has highlighted the need to widen the scope of our cultural understanding towards the non-human: animals, plants and the material processes of living organisms other organisms, as well as non-organic and inanimate agents, objects, machines or “hyper-objects”. Academically, generic terms for research focusing on the non-human relation have been “post-humanism”, “new materialism” or “speculative realism”, but this research takes place simultaneously in various fields and is not necessarily unified field. What is common to all of these orientations is their attempt to make us better aware of the ways the existence of human culture is interwoven with different kinds of technological, material, biological, geological, meteorological or even cosmological processes. The revelation of the complexity and interdependence of these processes challenges the everyday logic and the principles of common ethical, economic and political argumentation.

According to the working hypothesis of CARPA4 in performing arts, this type of questioning is reaching a certain critical limit, after which it starts to encounter a new kind of resistance. The reason to this is not only the obvious fact that these arts are to a large extent dependent on the performing human bodies and their material and immaterial reincarnations. It is also true that in the post-Holocaust and post-Hiroshima era, the artistic experimentation with corporeality in theatre, dance and performance art has been extensive. This experimentation has stretched out towards the non-human levels of existence and experience, but it has equally often been a witness to states that should rather be called inhuman. We ask, to what extent does the inhuman constitute a limit to non-human aspirations? What significance has the “inhuman” in the post-humanist world?

Human bodies which previously may have been considered either as objects or as means of liberation, today constitute a source of resistance, the political or ethical meaning of which nonetheless remains uncertain or obscure. Are not the immigrant bodies swarming at the gates of Western civilization or packed in refugee camps treated in an inhuman way, as “non-“ or “less-than-human” creatures? Let alone the bodies killed, tortured and humiliated in numerous conflicts all around the world? “Humanistic” values are not a prerequisite for considering the state of these bodies as “inhuman”. But how can this ethical stance or experience be connected with the aforementioned claims concerning the non-human? Why are not all “peoploids” living under the (Western) criteria of humanity considered as the heralds of the new non-human world order? Is there finally any difference between the inhuman and the non-human in the neo-liberalist world founded on the accelerated circulation of labor, production, and capital?

The colloquium approaches its topic area without specific disciplinary framings, collaboratively, and performatively, in an attempt to support the fruitful meeting of various points of view. It seeks common points of contact, resonating surfaces, and rhythmic interference between its heterogeneous but constituent parts.

CARPA4 reflects on performing practices from the point of view of their non-human factors. We ask:

It is in the performing body that the ecological question of the non-human intersects the ethical, political, pedagogical and juridical questions concerning the inhuman. But how should this intersection be understood and articulated? What consequences does it have for our ways of making, teaching and enjoying performing arts?

Peta Tait is Professor of Theatre and Drama at La Trobe University, Australia, and was elected a Fellow of the Australian Academy of the Humanities in 2013. She publishes on the practice and theory of body based arts and performance and phenomenology, and cultural languages of emotion and affect most recently in relation to species. Her recent books are: Wild and Dangerous Performances: Animals, Emotions, Circus (Palgrave Macmillan 2012); Circus Bodies (Routledge 2005); Performing Emotions (Ashgate 2002). She is also a playwright and recent performances include: Eleanor and Mary Alice at the Heide Museum of Modern Art in 2014, and co-written translated play, ‘Portrait of Augustine’, produced in Brazil, 2010-12. She was a Visiting Professor at the University of Helsinki in 2010 with the Erasmus Mundas masters in International Performance Research and was a panel member on the ARC ERA HCA 2010 and 2012. Her forthcoming book is Fighting Nature

Timothy Morton is the Rita Shea Guffey Chair in English at Rice University. He is the author of Nothing: Three Inquiries in Buddhism and Critical Theory (Chicago, forthcoming),Hyperobjects: Philosophy and Ecology after the End of the World (Minnesota, 2013), Realist Magic: Objects, Ontology, Causality (Open Humanities, 2013), The Ecological Thought (Harvard UP, 2010), Ecology without Nature (Harvard, 2007), seven other books and one hundred and twenty essays on philosophy, ecology, literature, food and music.

He blogs regularly at http://www.ecologywithoutnature.blogspot.com.

Boyan Manchev is a philosopher, Professor at the New Bulgarian University and Guest Professor at the Sofia University and at the HZT – UdK Berlin. He is also former Director of Program and Vice-President of the International College of Philosophy in Paris. His actual research, which advances the perspective of a radical mobilism and materialism, is focused on the fields of ontology, philosophy of art and political philosophy. The ontological concept of metamorphosis, the practical concept of disorganisation and the aesthetic concept of alteration are central for his transformationist approach.

He has participated as theorist, dramaturge and performer in theater and contemporary dance projects, including Tim Etchells and Adrian Heathfield’s The Frequently Asked, Boris Charmatz’s expo zero and Poster session “Mouvement” for the Festival d’Avignon and Ani Vaseva’s Frankenstein, A Dying Play and S.

We kindly encourage you to submit a proposal for presentation addressing one or more of the below-mentioned topics of CARPA4. The call for proposals is open until February 1, 2015.

The colloquium approaches its topic area without specific disciplinary framings, collaboratively, and performatively, in an attempt to support the fruitful meeting of various points of view. It seeks common points of contact, resonating surfaces, and rhythmic interference between its heterogeneous but constituent parts.

CARPA4 reflects on performing practices from the point of view of their non-human factors. We ask:

About the available spaces

The available spaces include auditoriums of different sizes, studios with concrete floors and rehearsal spaces with wooden floors. Also the large public lobby of the Theatre Academy is available for use. We will take into account the type of presentation you have proposed and allocate the spaces accordingly, but if you have specific needs please let us know. The use of all spaces is limited to the openinig hours of the Theatre Academy. Specific opening times will be confirmed when the final program is published in April 2015. Please, also note that there are limitations of using any stuff, liquids or materials that can damage the floors and the walls.

About the technical details

We will be able to provide you with necessary basic technical equipment and help. While there is a lot we can accommodate, please keep in mind that we cannot provide resources for large, full-blown performances. However, feel free to propose and ask! Regarding the equipment you need, please inform us in advance when filling the proposal submission format, even if you only need a video projector for your computer.

The Slogan for the Colloquium is: Peace, Love and Artistic Research.

Before the registration please, read first carefully the programmes of CARPA4 and Pre-Colloquium.

CARPA4: The Non-Human and the Inhuman in Performing -Arts-Bodies, Organisms and Objects in Conflict

Some of CARPA4 presentations were recorded, please find Vimeo links below.

Password is the same for all the presentations: Carpa15.

Unfortunately, due to technical reasons, 20 minutes of Timothy Morton´s presentation is missing.